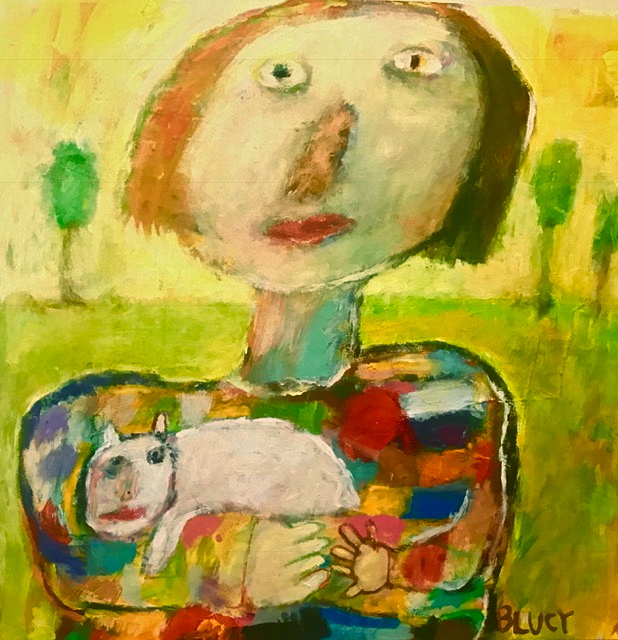 This girl and her cat are coming with me to a show next week in Louisville. I’ve never been to Louisville — or Kentucky, for that matter. Or Tennessee, which we plan to check out after the show—it’s only a couple of hours further south. My sweetheart is a musician, so that should be extra fun.

He’s even playing in a country-rock band at the moment (yes, there are country bands in Rhode Island), which he’s kind of embarrassed about. He used to look down his nose at country music, and I was pretty snobby about it, too. But you know what?   As corny as it is sometimes, it can be really great. People don’t just sit there — they get up and dance. You’re making people happy. You’re helping them forget for one damn night that the world is going to hell in a hand basket. I think that’s important work.

The songs are about love and loss and hope and joy, stuff we have in common with every person on earth, even people who seem completely different from us.

Like the Muslim woman last summer. My sweetheart’s band was playing at a campground in Massachusetts. The crowd was mostly white people in shorts drinking Budweiser. Not that there’s anything wrong with white people, or shorts, or Budweiser! (Well, actually there is something wrong with Budweiser—it’s awful.) That was the crowd, pretty homogenous. Except for this one Muslim family. A little boy who looked about two, two teenaged girls and a boy, and their mom, who was wearing a maroon dress that fell to her ankles and a head scarf .

A few songs in, our friend Sue, who makes a practice of forcing other people to dance whether they want to or not, grabbed the teenaged boy by the arm and dragged him onto the dance floor. Sue and the boy, who didn’t look as embarrassed as you might think, danced together, and soon the girls joined in. Before the night was over, Sue was twirling the little boy around in her arms, and the mom and I were dancing together, me in cut-off shorts and her in a hijab. We couldn’t stop smiling at each other. We were having so much fun, also we knew how funny the situation was, and also that it was a moment of magic. After all, this was during the presidential campaign. When the last song ended, the mom put her hand on her breast. “I love country music,” she said. “ It touches my heart.”

Maybe we’ll see her down in Nashville.